The SCATA Open Standards Working Group met early in 2022 to discuss Martin Hurrell’s proposal to enlist the help of the HL7 Devices group to author a FHIR Implementation Guide for the intraoperative phase of anaesthesia, based on his domain analysis model. This will be a challenging piece of work for a number of reasons. Although the scope is limited to just the intraoperative phase, we agreed that beyond the common FHIR resources such as Patient and Practitioner, there will be a requirement to either extend or create new resources to express fully all the concepts in the domain.

Anaesthetists are familiar with point-of-care devices (PoCDs) to monitor the patient and to deliver drugs in the form of IV infusions. PoCDs have enjoyed a lot of attention from the standards community. The ISO/IEEE 11073 (2020) standard for device interoperability has its own FHIR implementation guide. Looking at this in more detail, it’s evident that PoCDs are mainly electro-mechanical. Put another way, they are things with plugs.

In the context of anaesthetic and surgical care, many specialised devices are not electro-mechanical. Needles, tubes and catheters are all devices in the sense that they are manufactured, have a specific purpose and require training and expertise to wield safely. How should we record and represent the many and varied properties of invasive devices such as needles and tubes in a care record?

Needles, tubes and catheters have many properties. Before looking at them in detail, it may be worth clarifying what we mean by invasive in this context.

Our working definition of an invasive device is one that is inserted into a body structure via the skin or into an existing body cavity.

Immediately, we can see a problem with this definition. Leaving aside congenital sinuses and cavities, in addition to the mouth, nose, anus, urethra, vagina and external auditory meatus (ear canal) we must add the various -ostomies, the commonest in our domain being tracheostomy, and we mustn’t forget the eye, which is protected by conjunctiva rather than skin.

Perhaps more problematic is agreement on how far a device has to penetrate a body cavity or structure before it can be called invasive. We have a spectrum of invasiveness from ‘very invasive’ such as vascular and radiological procedures, to ‘minimally invasive’ and ‘hardly invasive at all’. It’s the latter that is most problematic. Nasal cannulae/prongs only enter the nostrils by a few millimetres, if at all and are classified as non-invasive. What about nasal cannulae for HFNOT? They enter the nasopharynx – does this mean they are non-invasive or minimally invasive? In our classification below, we’ve opted for non-invasive, but it’s far from black and white.

Now that we have a working definition of invasive, let’s consider the types of invasive devices that could be used in a typical intraoperative care episode. At this stage, we’re constraining the list to needles, tubes and catheters. Typical examples might include:

Before looking at their properties, we should clarify some terms.

A cannula, according to wikipedia, is a tube that can be inserted into the body, often for the delivery or removal of fluid or for the gathering of samples.

In other words, it’s a type of tube. We don’t need to worry too much about needles or trocars inside cannulae at this stage, but we need to consider the distinguishing features of the three devices – needle, tube, catheter.

In our devices mind map (see below), we have a property type that is enumerated as [needle, tube, catheter]. If we had to elaborate further, we might say something about rigidity, or its converse, flexibility. There is a spectrum from rigid to flexible that begins with large-bore needles, progressing to fine-bore needles, PVC and rubber tubes and ending with soft, flexible catheters. Rigidity is determined by material, gauge and in the case of rubber and PVC, to an extent, temperature. Rigidity can be modified, either by heating or cooling, if it has an impact on the ease with which the device serves its purpose. An example would be the refrigeration of nasogastric tubes to increase rigidity and facilitate passage into the oesophagus.

It can be argued that needles and catheters are just a type of tube made of different materials. Taking this analogy further, some devices are formed from two or more tubes bonded together.

In attempting to classify needles, tubes and catheters, we can think about them as one or more lumens, each with its own properties, sometimes bonded together. A double-lumen endobronchial tube is essentially two single-lumen tubes bonded in a specific configuration. A triple- or quad-lumen central venous catheter can be thought of as three or four lumens bonded together, identified by gauge, colour and the configuration of their exit points – tip, side, proximal or distal.

Putting all this together, we attempted a mind map that tries to tease out common or related properties. The current draft in XMind is here.

As will be apparent from the thumbnail, there are a lot of device properties. In the remainder of this post, I’ll try to highlight the more controversial decisions about what properties are common to the device, and those that sit more comfortably as properties of the lumen.

Looking at existing care records, it’s evident that occasionally, we like to record special device features such as reinforced tube and insulated needle. Other properties that might be considered worthy of recording are included as shown. The substance that a device is made of would normally be part of the manufacturer’s specification – something that we’ll come back to.

It would be unusual for a device to have multiple lumens composed of different substances, but if you can think of a use case, please get in touch.

Typical examples might include Tuohy needles (centimetres) and many types of catheter. 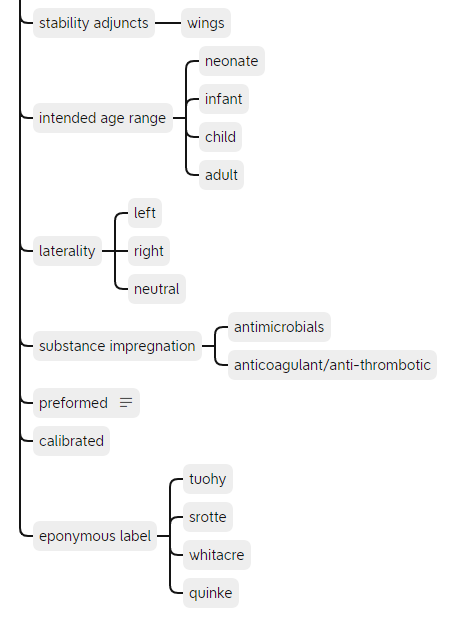 The remaining common properties are shown above. Some properties such as eponymous label could be extended and are best implemented as a value set linked to a terminology such as SNOMED-CT.

Finally we come to the properties of the lumen(s). These are illustrated best, with accompanying notes, in the mind map, but a summary follows.

The multi-lumen central venous catheter (CVC) presents a problem for the model, as it has both a size property for the catheter itself, generally 7F (French Gauge) for an adult, and a size property for each of the lumens. The latter are normally given in SWG, just to confuse matters further. As a consequence, we require two size properties – one for the device as a whole, and another for the lumen(s), recognising that for single-lumen devices, the metric will be the same. The model can cope with this, as we can constrain out any redundant size properties for single lumen devices.

Having set out these properties in as much detail as we can, the next task is to build a model in one of the open frameworks. So far we’ve mentioned HL7-FHIR but in the interests of inclusivity, we should also mention OpenEHR. The two frameworks have important differences in the way that they approach the design and implementation of clinical models.